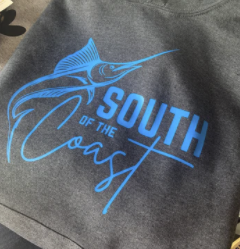 For two Goochland Middle School students, a love of fishing and a class on entrepreneurship have combined to create a legitimate business that is making money and helping local anglers be more successful. This isn’t your typical fish story – Isaac Kowalski and Miller Nixon have developed a lure that proves its worth. “I just caught a six-pound bass,” Kowalski said.

Fishermen since, they say, almost birth, Nixon and Kowalski experimented with making their own lures before their joint business venture, but things got serious when they took the nine-week Make It Your Business (MIYB) class at Goochland Middle. Taught by Randy Burts, MIYB gives students opportunities to learn about building a business. “We quickly look at how to develop a business idea and what is necessary for the business to run and stay successful,” Burts said. “We look at a lot of different ideas that, in some cases, solve problems, and in other cases have improved upon ideas that were already proven,” he said.

MIYB is taught in middle school as part of a wheel of other career exploration courses. “Middle school really is a time where you have these kids who are discovering who they are. And this is a good opportunity for them, while they're in discovery mode, to start thinking about their future, their passions, and things that they're starting to spend more time on,” Burts said.

After conversations about profits and business longevity, students in MIYB work in groups to come up with names and logos for their businesses. Burts then teaches students about budgeting and developing business plans. Once these elements are complete, students present an interactive slideshow of their business idea and develop a graphic or video advertisement. Students are graded on those work products, not whether they actually start their business. “But if they want to create their product or deliver their service, then they get extra credit,” Burts said.

Kowalski and Nixon have definitely earned their extra credit. Their business, South of the Coast, has had pop-up shops at Bow and Sparrow and they have big plans for other selling opportunities. With a well-designed logo and a catchy name, they’ve also expanded their business by offering shirts, sweatshirts, stickers, and soon, hats. “We’ve sold a lot of shirts,” Nixon said. “It wasn’t expected.”

Their primary product, a fishing lure, was designed by the students and a mold was created using a 3D printer. “All of our lures are mainly going for small- and large-mouth bass,” Kowalski said. “But every now and then we make some that you could use in the ocean for speckled trout or bluefish.”

Their lure is all about the action. “It’s really slim at the tail and makes the tail move like crazy, just like an injured fish,” he said. And the lures come in six colors to help anglers catch fish in varied settings such as ponds and rivers, Nixon said.

Nixon says being a business owner is exciting. “It’s fun experimenting with different colors and flakes,” he said. Kowalski agrees. “When I catch a fish with something I know I made, it gives me some sense of satisfaction.”

“I know that not every student will want to become an entrepreneur, but ultimately, my goal is always to help give my students a skill that they can utilize in life,” Burts said. “And it gets to be pretty exciting because it's a way for students to express or even discover ways that they can incorporate things they have passions for into a profitable venture.” Follow South of the Coast on Instagram @south_of_the_coast and purchase branded clothing at https://tinyurl.com/4kua79dk